A pioneering project, one of several initiatives led by Mayor of the Liverpool City Region, Steve Rotheram, and St Helens Borough Council to make active travel safer and help achieve net zero targets by 2040, has come in for high praise during Road Safety Week. 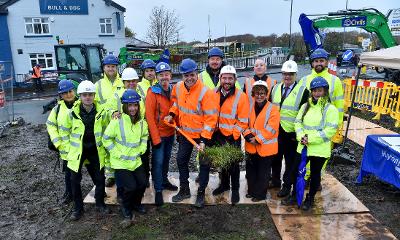 Last week, work started in Lea Green to install a CYCLOPS (Cycle Optimised Protected Signals) junction, which is the first of its kind in the Liverpool City Region - with St Helens-based firm Huyton Asphalt overseeing the project.

Replacing the roundabout by the Bull & Dog pub, the CYCLOPS - which prioritises the safety of pedestrians and cyclists by segregating them from motorists, reducing risk of collision - forms an integral part of the £15m St Helens Southern Gateway scheme, a partnership between St Helens Borough Council, the Liverpool City Region Combined Authority and Northern Rail to help make sustainable travel an easier choice for commuters who use Lea Green Railway Station, one of the borough's busiest stations.

The CYCLOPS is one of a number of improvements being introduced around Lea Green Railway Station as part of St Helens Southern Gateway - funded by the Liverpool City Region's Transforming Cities Fund - with work underway on a new decked car park and ticket boking system to take Park & Ride capacity to around 450 vehicles; a new station building with waiting room, toilets and other customer facilities - along with seven new walking and cycling routes to connect Lea Green to nearby residential, leisure and employment areas.

"For far too long, too many people in our region have been forced to contend with a fragmented, under-funded public transport system that simply doesn't work for them. Thanks to devolution, we're working to change that by putting the 'public' back into public transport.

"Because if we are serious about playing our part in tackling the climate crisis, then we have to do all that we can to reach our target to be net zero by 2040 at the latest - and we can only get there by encouraging more people to leave their car at home for shorter journeys.

"That's why we're investing £42m on active travel infrastructure across the region, including this first-of-its kind junction in St Helens, to connect historically underserved parts of our area with a faster, cheaper, greener, and more reliable transport network that not only works for them, but for our planet too."

"As a highway authority, we are responsible for 484 miles of road and a further 553 miles of footways. I am determined to ensure they are kept safe and in the best possible condition they can be within available funds, whether you drive, cycle or walk - not just for today, but for the future. I also want to ensure that we lead the way in achieving net zero by 2040, which projects like this support.

"St Helens Southern Gateway is a flagship scheme showing our investment and commitment to road safety, active and green travel by introducing improvements and routes around Lea Green, one of the borough's busiest commuter stations, with services calling at some of the UK's major cities.

"Our vision is to be a leading highway authority, creating a well-connected, accessible transport network that supports economic growth and the innovative St Helens Southern Gateway scheme is a fine example of that commitment. It is also important that the Councill maximises its returns on such investment and with Cabinet having adopted a new Social Value Policy last week I am really pleased to see a St Helens based contractor, Huyton Asphalt, being appointed to the CYCLOPS project."

The whole St Helens Southern Gateway scheme is expected to be completed by late Spring, 2023. For more information, www.sthelens.gov.uk/leagreen

There's still time to have your say on a new draft strategy which sets out a ten-year plan for improving walking and cycling infrastructure across St Helens Borough.

The draft St Helens Borough Walking and Cycling Infrastructure Plan is a key part of the council's vision to make the borough an accessible place for people to live, work, invest and thrive by delivering the safe network needed to encourage more people to choose walking or cycling for their journeys.

To take part in the consultation - which closes on Sunday 27 November - visit: https://www.sthelens.gov.uk/LCWIP